I feel like I’ve spent a lot on patterns this year (am I haunted by what I learned about myself by forking over $30 for a single pattern? Maaaybe), but I’ve also reused or outright copied a fair few, including the Pauline Alice Turia dungarees. These are a reuse AND a copy, since I based my modifications heavily on photos of Tilly and the Button’s Cleo + this tutorial.

I wasn’t too direct, by which I mean I didn’t bother with a front or back seam – why cut apart and then try to reattach and topstitch perfectly parallel corduroy wales, y’know? – but the general notion of a shortie dungaree dress with no waist seam agreed with me, and ’tis the season. By the way, I completely failed to notice I already have pants made from this exact same corduroy until I got it home. It cost $12.75/yard not quite three years ago; this time I paid an eye-smarting $17/yard. Eek.

But I guess I know what I want! This is useful, when I can find it. It’s a little trickier when I can’t. Specifically, I struggled to buy traditional overalls buckles, even for ready money.

I could only find the hardware locally at Gather Here, and only in a Merchant & Mills pack with two buckles and a handful of rivets for fifteen extremely bold-faced dollars. My money’s not that ready! I don’t care if the buckles were forged in the fires of Mount Doom – I’m not paying $15 for $4 – $6 worth of hardware.

Then I remembered the extremely ragged pair of Turias in my mending basket. They’re not getting used any time soon, so I stripped the brassy buckles from those. Then I re-remembered ANOTHER pair of Turias, pristine in my giveaway box, so I swapped the brass buckles for their nickel set. And happily this shell game resulted in my ideal outcome, a nice cool silvery finish against the warm corduroy!

I’m pretty jazzed about all my finishes, in fact. This project was so fast and straightforward, and the sides so relatively short, that I decided to bias bind the seams. I think they’re just plain handsome. I left the top ¼” and the bottom 1.25” of the side seams unbound to reduce bulk when turning those edges.

I could have bound a little closer to the bottom hem, since I elected not to take that full allowance. But I bridged the gap with yet more binding so everything is still sealed and pretty. I did baste the sides together pretty early in the sewing process since I wasn’t sure if I was even in the ballpark of a reasonable hem length; I had already added 3” to the Turia shorts length, but I was prepared to use either a facing or extension as needed. In the end 3” was enough, but since I like sewing turned hems better than faced hems, another 1” of turning allowance wouldn’t go amiss.

Also, this basting check also confirmed what I had hoped – I wouldn’t need a side seam opening. It’s a wiggle in/wiggle out situation.

I’m really happy with the binding/corduroy combination! I couldn’t find a perfect match to the Kaufman corduroy color (Russet), but this Kona cotton in Roasted Pecan was darn close and it rang my tonal bell. I used bias binding to face the curved pocket openings and the side seam curves, following as always this Grainline technique, which wildly requires no ironing.

I pinned estimated pocket placements when I basted the front and back together, but ultimately moved them all a bit anyway. The original Turia bum pockets are small – these are a good 1” wider on each side, plus I only folded over ¼” before topstitching, and they’re still not huge. I widened the front pockets a smidge too, but just a little and on the fly.

My first needle broke when I was topstitching the patch pockets in place, specifically where the bias facing folded back over itself, but after that I switched to a fresh 90/14 needle and had no more issues.

I did a little sneaky Googling to figure out how the TATB Cleo dungaree dress was finished and found this very helpful blog post from Thread Carefully. One of the nice details of the Turia, though, is how the top edges of the front and back bibs are faced for a couple inches. It’s a stable finish that uses fabric efficiently. The Cleo facings looked like a fabric hog, so I stuck with what I knew. I also triple-layered the top front edge by folding the facing extension twice to support the rivets, and skipped interfacing.

By the way, have you ever had the experience of doing something you know to be correct and still being surprised at a successful outcome? That was me, lining the straps with quilting cotton instead of self-fabric. I trimmed a scanty 1/8” from one long edge of each quilting cotton piece and sure enough, the corduroy rolls to the back! It’s like…there’s a good reason I’m supposed to do stuff like that!

Anyway, I’m 1. Generally self-aware and 2. Specifically self-aware that I look like a butternut squash while wearing this, but I like it and it’s cozy and I’m happy and it all came out according to plan. With one exception: I have such a weird amount left of the corduroy – a full foot selvedge-to-selvedge, and a large additional rectangle. No clue how I’m gonna use it! 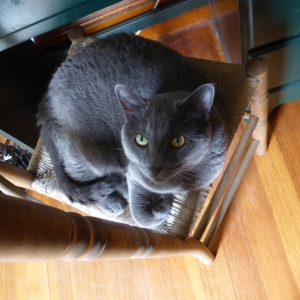